Bari is a very ancient city, whose origins take roots 3.500 before the bronze-age. For its geographic position, Bari started very early commercial exchanges with Greece, but only in roman époque the settlement started to develop as a real city. In 465 A.C. Bari became episcopal seat, while in 1025 was annexed to Holy See. In 1071 the centre was conquered by Roberto Guiscardo with whom the city passed from the East Byzantine to the West latin, fulfilling the most important turning of its history. Until XVII century crossed a lot of phasesof decline so that, in XVIII century, when Borboni came to power, the City was the shadow of itself : the urban core was stifling inside its walls, for this reason Gioacchino Murat conceived an ambitious project of expansion, relaunching the settlement like the principle harbor of the region. 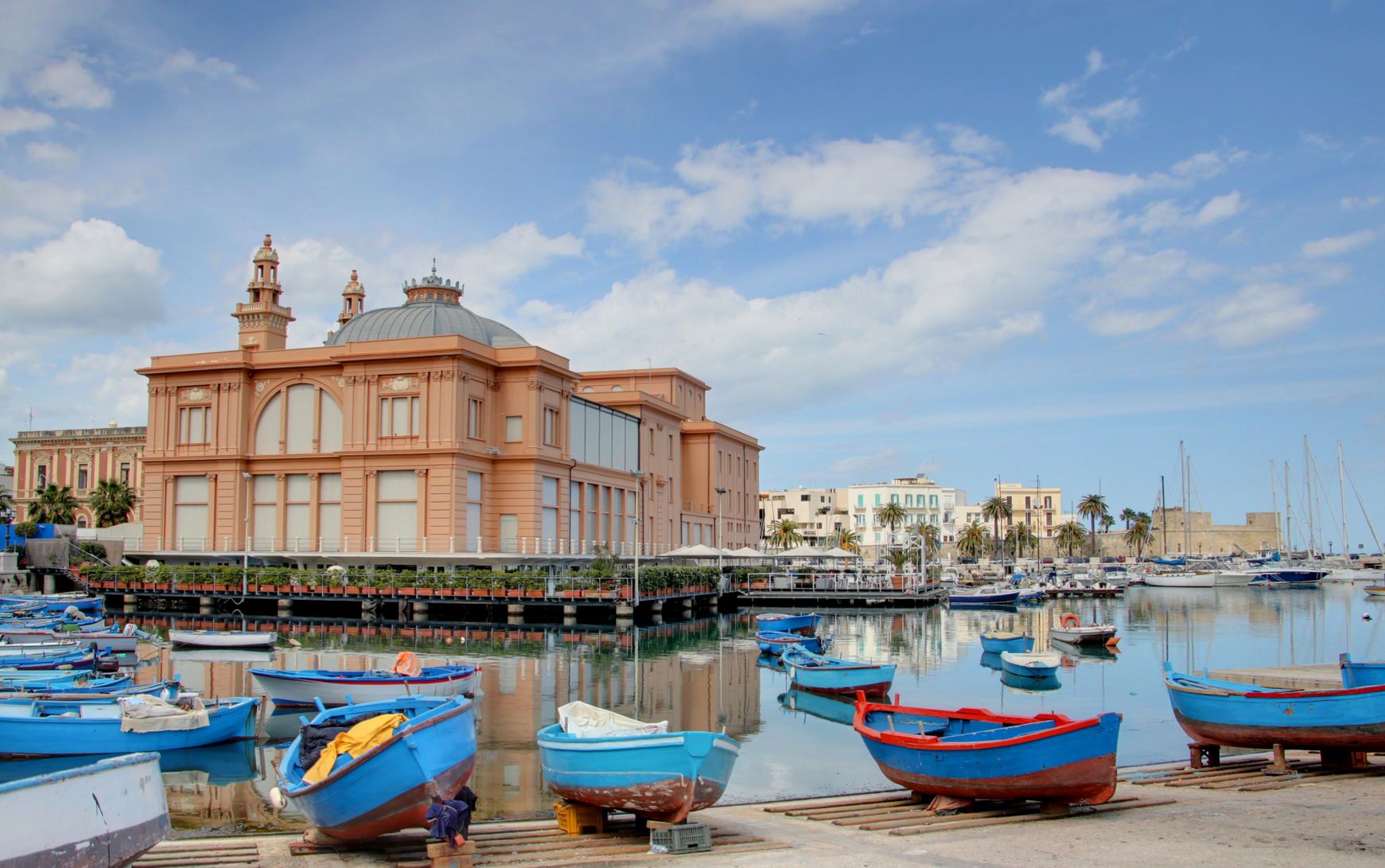 The Petruzzelli Theater, owned by the family Messeni Nemagna, is the most important theater of Bari and the fourth in Italy. The history started when Onofrio and Antonio Petruzzelli , dealers and shipowners from Trieste, presented to the City the project of the theater realized by the engineer of Bitonto Angelo Cicciomessere (then Messeni), married with their sister Maria. The project was accepted and in 1896 was signed the contract between the family and the City. With that contract the city subsided the area to the Petruzzelli for building a theater. Two years later, in October 1899, started the works financed by the family, and ended in 1903. 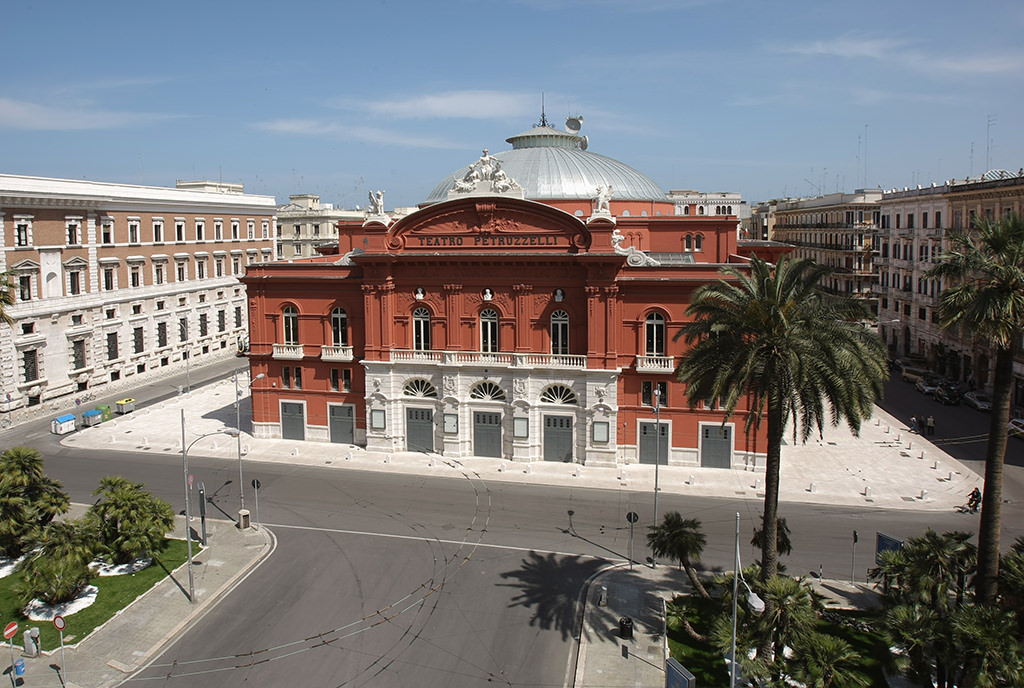 Inside, the theater was frescoed by Raffaele Armenise, decorated with gold, and gifted with heating and electric light with 2.192 seats. The theater removed the primacy to Corato. It was inaugurated Saturday 14th of February 1903 with the masterpiece of Giacomo Meyerbeer, the Ugonotti. In 1954 was declared “Monument of artistic and historical interest” with a law of protection. In the night between the 26th and 27th of October 1991 it was destroyed by a malicious fire and only the collapse of the dome, stifling the flames, avoided the destruction. The last opera represented was The Norma, which ends with a fire for the irony of fate. It was reconstructed and inaugurated in 2009.

The Basilica of Saint Nicola

In the heart of the old city, The Basilica of San Nicola, is one of the most famous example of the romanesque architecture in Puglia.It was built in Romanesque style between 1087nand 1100, during Normans domination. The edification was connected to the relics of Saint Nicola, translated by 62 sailors of Bari form Myra, in Licia. The relics arrived in Bari 9th May of 1087. The relics were temporarily hosted in the monastery of san Benedetto handled by the abbot Elia, who promoted immediately the edification of a new big church. An area, which hosted The Palace of Catapano, Byzantine governor, was chosen for the edification.

That Palace was destroyed during the war for the municipal freedom and was gifted the year before to the archbishop Ursone by Roberto Guiscardo. The works started in july of the same year. The 11th of October 1089 the relics were translated in the cript of the Basilica by Urbano II, arrived in Bari for this reason. The construction, realized in at least 3 phases, ended in 1103, when a parchment speaks about the Basilica like already “constructa”. The tombstone of consecration in 1197 , which someone interpret like the end of the works, was an act of devotion to Enrico VII of Svevia, who, in memory of his father Federico Barbarossa, left for the Crusade, asking the blessing of the Saint.Important to see: the cript, who has the tomb of the saint, the Russian orthodox chapel, the Chair of Elia, the capitals of the middle-age, the ciborium, the altar and the seventeenth carvings in gold.

Findings datable to the Greek-roman era induced the experts to speculate the existence of the fortress already in ancient era. However in the “Satire” ( I, 5, 96-97 ) of Orazio and in the “Annales” (XVI, 2, 7-9) of Tacito , it is written that in the ancient Barium there was a fortified place, whose collocation could coincide with a part of the actual castle or, more probably, with byzantine Kastròn (court of the catapan- Basilica of Saint Nicola).The medieval fortification probably is datable to 1132. 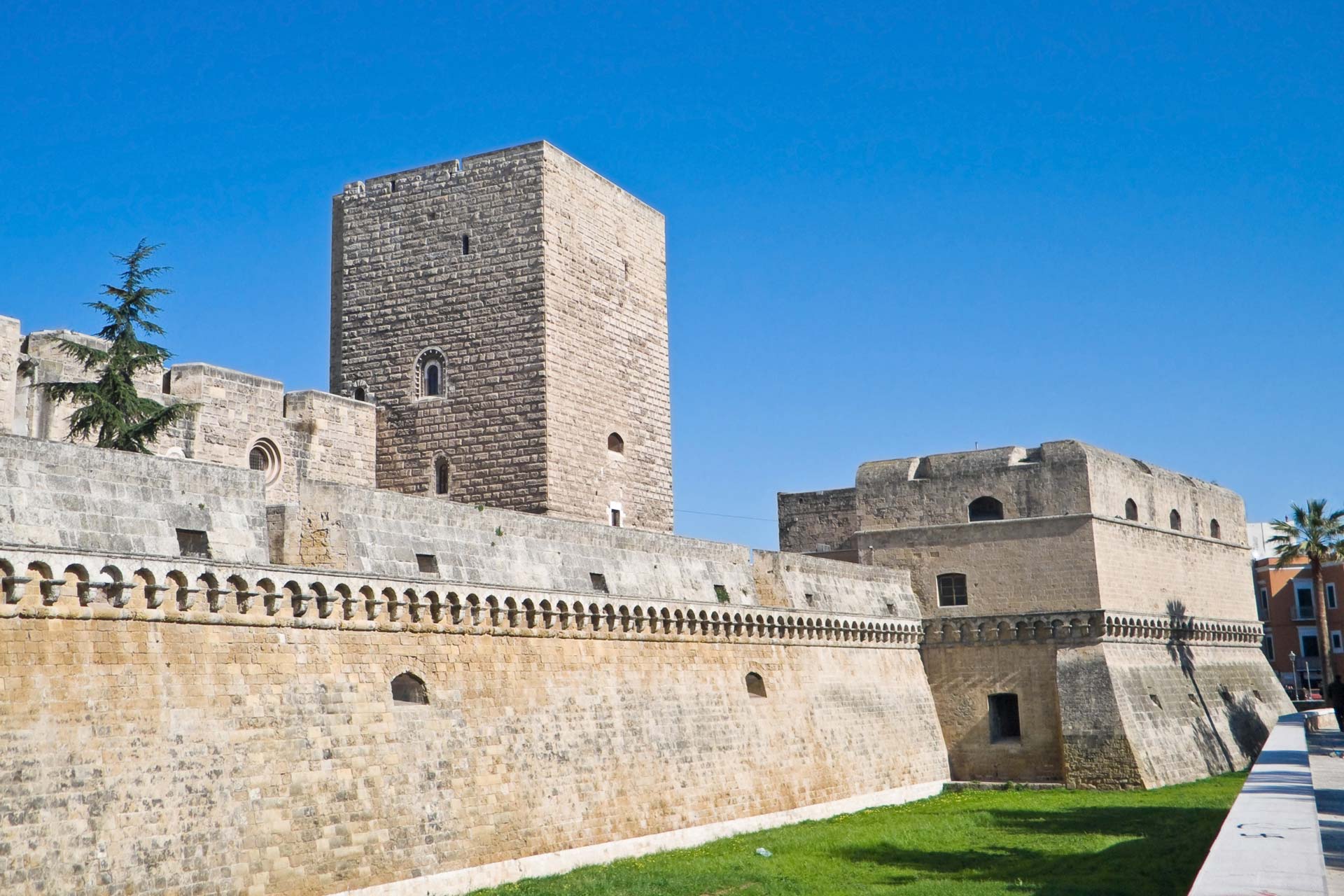 The building, wanted by the Norman king Ruggero II of Sicily, was destroyed in 1156 by people of Bari ,who induced the king Guglielmo I of Sicily to raze the city except for some places of worship ) and reconstructed already in 1233, when the Emperor Federico II of Svevia wanted the rebuilding and the reinforcement. It was modified different times in Angevin era and it became the property of Ferdinando d’Aragona, who gifted it to the family of Sforza. The dukes wanted the extension and the refinement of the castle which after some years passed to the daughter Bona Sforza, Queen of Polonia, who died in 1557. Afterwards the construction, returned in the hands of the kings of Napoli, became prison and barrack. Today the castle presents an ancient moat, on three sides, except for the northern side, once wet from the sea; there are also town walls, datable to Aragonese era, with big bastions.

The Stadium of Saint Nicola

The Stadium of Saint Nicola is the most important sports facility of Bari and Puglia. Projected by Renzo Piano and nicknamed “spaceship” for its conformation, has been realized in occasion of the 14th football world cup; in fact the 19th June 1984 the FIFA approved the candidacy of Italy for the world championship of 1990. Bari was between the 12 cities candidates, but it was immediately evident that the ancient Stadium of Bari, “Della Vittoria”, was unable for the competition. Besides, there was also Lecce with its stadium “Via del Mare”, built in occasion of the promotion of the City in the higher category in 1985. For this reason the city decided to construct a new sports facility , whose design was assigned to Renzo Piano , famous architect, the 21th Genuary of 1987 ( He gave the name “spaceship”). It’s the fourth in Italy for the size. 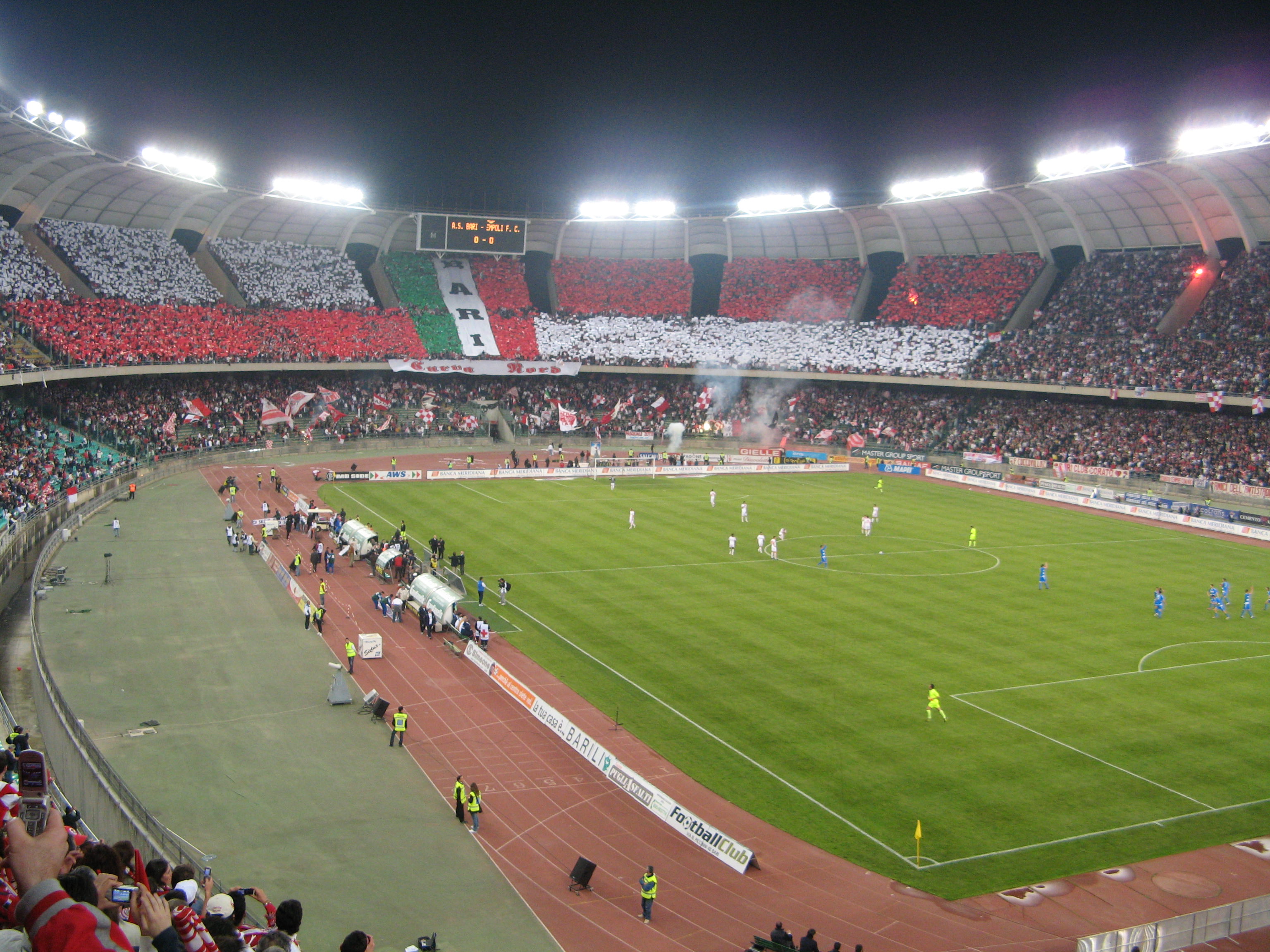 The Cathedral of San Sabino

Nearby the Castle, at the gates of the old city, the metropolitan Cathedral of San Sabino is an historical episcopal seat and repeats in its severe and harmonious lines the architecture of the Basilica. Built in the XIII century, it’s a beautiful example of Romanesque and in the hypogeal saves important archeological finds, like the remains of a roman building, the Early Christian Basilica with 3 naves and a little byzantine church. Crossing the threshold, it is possible to admire the three naves, divided by 16 columns which support bows and false women’s galleries. In the eighteenth-century cript splendid marbles exalt the icon of the Virgin of Odegitria, arrived in the harbor after a strong storm, and the relics of the saint Sabino. 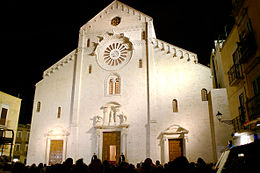